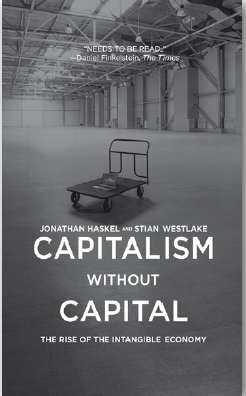 Capitalism without capital. The rise of the intangible economy

Jonathan Haskel and Stian Weslake published Capitalism without Capital at the end of 2018. Haskel is a well-known professor at the Imperial College Business School, who has written dozens of articles on intangibles, technology, and produc- tivity. Weslake is also known for advising the UK Ministry of Science and Innovation and for being a consultant and researcher on issues related to innovation and technological change.

The book, while technical, approaches the rea- der in a way that is enjoyable and accessible to anyone with a basic knowledge of the economy and society. Over eleven chapters they make a detailed review of the economy of the intangibles. They emphasize the conceptualization, measurement, management, and impact of intangible assets in the economy and society. Although it highlights aspects such as R&D and software, the book is highly recommended for experts in branding, commu- nication, CSR or corporate reputation.

The example of the power of intangibles is simple: a car manufacturer has to invest a lot of money in the development of its first prototype.

After its initial construction, the first productions can be expensive until perfection is achieved in the design of the model. Thereafter, no matter whether it is the 100th car or the 1 millionth, there comes a time when the cost of production is maintained successively. However, under the economy of intangibles, a company like Apple can spend a lot of money in the development of an application, but all those downloaded after- ward are practically free to produce.

Thus, Haskel and Weslake begin with a clear and simple definition of what intangibles are: «something you can’t touch». Later, they show that intangibles have gone unnoticed by the eco- nomy of countries and a large part of business ma- nagement. While these actors and their institutions focused on physical, tangible realities, a tsunami of digital transformation has revealed the importance of business intangibles such as software, R&D, pa- tents, branding, and communication.

The truly interesting thing, and the common thread of the work, is the set of characteristics of the intangibles that are shown in its pages. In particular, the authors highlight four aspects that make the intangibles behave differently from what the economy has traditionally evaluated:

One of the strengths of the work is that at no time do the authors want to sell the idea of intan- gibles. They simply try to argue that it is important to consider the transition from classical models. Therefore, measuring, focusing and managing aspects such as software, brand, corporate culture, patents, etc. are fundamental in current society.

The reader becomes uneasy because he or she observes that it is important to push for change at all levels. Regulations should be more dynamic in terms of intangibles (registration of patents, trademarks, etc.), the wealth of nations should be adjusted more precisely to the measurements related to investments in intangibles; and, arguab- ly, tax aspects should also be revised to adapt to a world based on the «you can’t touch» aspects. On the other hand, a similar reflection that emerges in the reader is that, along with the change of paradigm in the area of economy, there is a powerful social impact in terms of inequality. Thus, the economy of intangibles can be an im- portant cause of the growth of inequality. Firstly, because those who can use spillovers and syner- gies are usually part of a small circle of companies and entrepreneurs. Secondly, the skills of mana- gers of intangibles are becoming so important that hiring these people is not affordable for any com- pany. Finally, the proper management of intangi- bles requires a powerful training and educatio- nal level that not everyone can afford.

This book is essential for those involved in branding, reputation, corporate social responsi- bility, and other intangible assets.

Although it focuses on the importance of software, it men- tions that marketing and communication efforts are a fundamental value for organizations under this new paradigm of intangibles. Despite the fact that a priori, the book might seem to be very technical, I believe that it provides the necessary support to value the work that brand and repu- tation professionals and scholars do every day. Somehow, this «something that you can’t touch» is reinforced and acquires personality thanks to managers and experts in the discipline who know how to give identity and positioning to each of the technological developments that follow us every day.