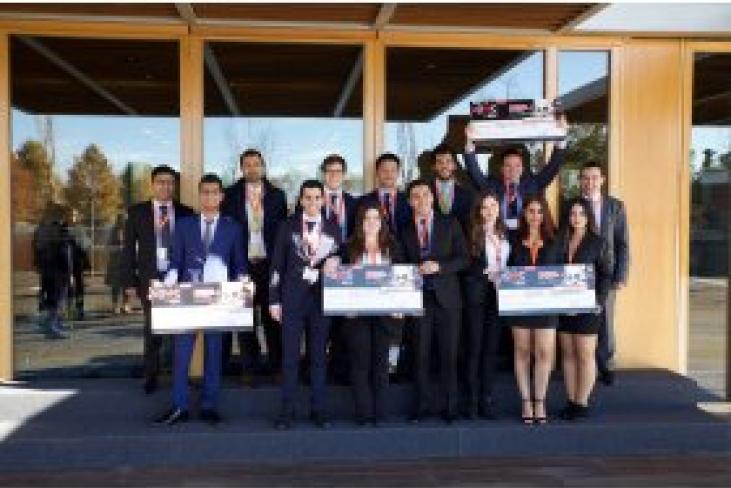 The grand finale of the 21st edition of the Global Marketing Competition (GMKC), the largest international business competition for students and the only one that brings together the three international associations of the most prestigious business schools in the world (AACSB, CLADEA and EFMD) was held in the Santander Group City yesterday. It was organized by ESIC Business School, the newspaper ABC and Banco Santander, through its Santander Universities Global Division.

In this new edition, the five finalist teams, out of more than 2,000 made up of 4,983 students from 881 universities and business schools from 89 countries, defended their business project – carried out over several months through a business simulator – before an international jury of academics and professionals.

Global Marketing Competition (GMKC) is an international competition whose objective is to strengthen the ties between the academic and business worlds. It is intended for undergraduate and graduate students, following either MBA or PhD programs at public or private institutions. More than 60,000 students, 2,000 companies, universities and national and international business schools are part of the 21-year history of the most advanced business simulator on the market, which promotes a culture of entrepreneurship and innovation among university students, an effort which has been rewarded by the great recognition of the School in all areas related to marketing both at national and international levels.

Thanks to the GMKC simulator, teachers and students have a highly sophisticated test laboratory, which allows participants to prepare and be tested on matters necessary to approach the real business world.

In this edition, the team formed by Mohamed El Madani, Cristian Jesus Merino and Ana Ranz Moreno from Rey Juan Carlos University (Madrid), Complutense University of Madrid and Tu Delft University (Netherlands) won the business competition receiving a prize consisting of 6,000 euros plus a specialized master’s program taught at ESIC for each member of the team.

The members of the winning team were “euphoric” after receiving the award. “We have worked very hard to be here and it is the best prize we could get,” said Cristian Jesus Merino, in recognition of an effort “amply rewarded.” Meanwhile, Mohamed El Madani recommended this “wonderful experience where we have learned a lot, because the simulator gives you an overview of the way a company is operated and that is priceless.”

These young people managed to beat the team comprising Frédéric Jean Duda and Mikhail Lapirov, students from the Mannheim University in France and Germany, who were second in the classification with a prize of 4,000 euros. In third place, Nurseli Asel Zengin, Umut Açikgöz and Bü?ra Yilmaz, students from Istanbul and Dukuz Eylul Universities, received a prize of 3,000 euros.

The team made up of Alvaro Garcia, Yang Yang and Victor Pita from the Polytechnic University of Madrid were awarded fourth place with a special prize of 2,000 euros. While the team of Alok Kaushik, Sagar Khandelwal and Yogesh Mehra, students from the Italian MISB Bocconi, achieved fifth place receiving a prize of 1,500 euros.

All the finalists agreed to highlight the great learning derived from the competition regarding teamwork and learning to cope with difficulties. They also acknowledged that “the way travelled up to here” is an “unforgettable” experience.

One of the main advantages of this simulator is that the teams compete against one another and not against the machine. In this sense there are no tricks or winning strategies a priori. Each market simulation (with 5 teams) evolves differently depending on the choices each team makes.

Simón Reyes Martínez Córdova, President of the Governing Board and Honorary President of ESIC, assured that the Global Marketing Competition “is a magnificent school for future entrepreneurs and a complement to the theoretical training provided at university, giving those students who participate the chance to look into business ventures more closely”. Undoubtedly, this simulator enhances the business and international vocation of the School.

On the other hand, Salvador Medina, in charge of the Social and Institutional Impact of Santander Universities, said: “We have been working with the university sector for the last sixteen years and the Global Marketing Competition of ESIC has established itself as the ‘laboratory’ of international reference in business management, where young students and professionals from all over the world apply the knowledge learned in the classroom on real-life business situations. Thus, we could say that the simulator is the most effective ‘incubator’ of business managers and professionals to get them prepared for a dynamic, competitive and global environment.”

For Javier Caballero Urquizu, managing director of ABC, “the business simulator is a very valuable tool for young students around the world because it provides them with a strategic vision of the company. Backing this 100% Spanish initiative is to support society, a society which is changing at dizzying speed. From ABC we face these changes with values and principles which are the same that inspire the simulator.”

Hundreds of companies have collaborated in the simulator, which is “one of the most advanced in the world, providing scholarships which have helped the participation of thousands of university students and graduates. They are all companies that rely on the new generation of university graduates by offering them the chance to acquire the most up-to-date training, skills, creativity and a greater degree of experience, so necessary for the development of their profession in the future.”