The Global Marketing Competition, the business simulator that shapes the directors of the future 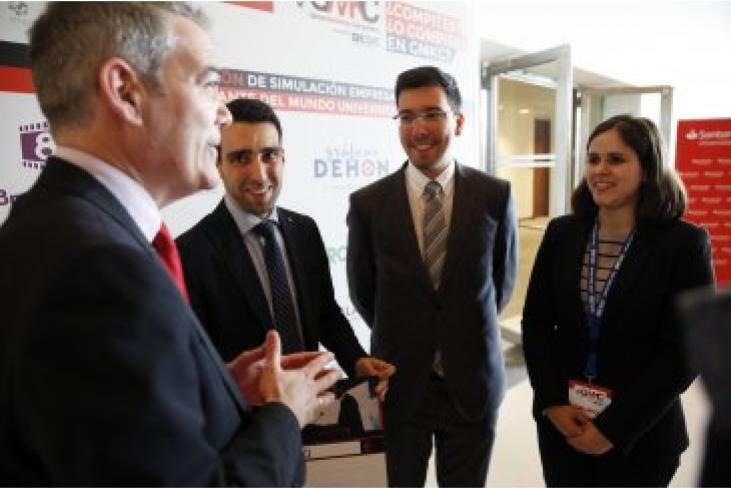 On the December 11, in the Santander Group City took place the final of the Global Marketing Competition, a 100% Spanish initiative led by the business school ESIC with the collaboration of the newspaper ABC and Santander Universities, in which four teams India , Portugal, Argentina and Spain had the opportunity to defend their business project developed for months, through a simulator in which they had to deal with real-world problems and become for a time "CEOs" of a company in the sector of the automotive industry. The award was given to the Portuguese team formed by Luis Filipe Carvalho Valente, Bruno Fernando Reis Ribeiro Silva and Maria João Portero Campos.

Madrid, December 17, 2018- The award, which was presented at the Banco Santander Financial City, is worth €6,000. "It is incredible to receive this award, indescribable," said the winners, who competed with 2,163 other teams formed by 5,195 students 881 universities and business schools in 89 countries, which accounts for the size and international impact that The Global Marketing Competition has achieved. In Spain, the teams have also had the support of more than 15 companies, which have sponsored and granted them a scholarship.

Santander Universities, Amador Fraile, its director of agreements, highlighted this 100% Spanish initiative as an opportunity to find that young talent that has been spread around the globe. Specifically, he described the participants as "restless students, with goals and who want to contribute to the world of companies and society."

The second prize of €4,000 was received by the team of the Spanish brothers Juan and Andrés Cardelús; the third prize, of €3,000, the Indian team formed by the students Abhishek Sinhal, Partha Ranjan Rao and Saket Dugar; and the fourth prize of €2,000 went to the Argentine team composed by Matías Fabián Molina and Nicolás Andrés Pezzot.

The organizers stressed that there are no losers because "they are all winners because they are here", according to José María de la Guía, director of Marketing at ABC. Felipe Llano, Director of Corporate and Business Development and deputy to the General Directorate of ESIC, pointed out the importance of this project "that has been created under an atmosphere of exchange of knowledge and values among young students that over the years has been opening more and more to the whole world. It started as a local initiative in Spain and now covers America to Europe, also passing through Asia. An award that no longer has borders. "

The Global Marketing Competition is the largest business competition for students at the international level and the only one that brings together the 3 international associations of business schools in the world, such as AACSB, CLADEA and EFMD, which for more than 23 years has organized the business school ESIC with the collaboration of the newspaper ABC and Banco Santander, through Santander Universities.

Since its beginnings, more than 60,000 students have participated in this business simulator that helps train future managers of the XXI century, including future marketing managers.

Thanks to the GMKC simulator, teachers and students have a test laboratory at the highest level, which allows participants to prepare and be tested on the issues necessary to address the world of the company, the real world.